Hajimemashite minna san....welcome to my site on my fave Japanese Pop Culture likes such as dramas, movies, magazine scans, promo events etc. Mainly concentrate on my faves...Rena Takeda... Bae Suzy... Nogizaka46!....Risa Watanabe.... Nanase Nishino!.... if you're a fan at all of any of them then you've come to the right place(!) but many others are featured here besides them. Do mainly quick reviews on things I've watched, try to make the reviews brief, quick to read through with not too many spoilers, just whether they're good or bad and why I thought so plus whether you may find them enjoyable. Many, many screenshots are included from everything I've watched plus any video trailers if they're available. Hope you find something that interests you, don't hesitate to comment, arigato gozaimasu!
Also these days(mid-2017) have many posts for Korean actresses, dramas and films that are worth checking out as over the years have become a much bigger fan of Korean dramas versus the ones from Japan.
Few tidbits....
New item on the right is the 'Featured Post of the Day', will be putting some fabulous oldie posts which some of you may have missed the first time around, all will be at least one year old.
The new blog is up and running, there you will find 100% of the posts dedicated to actresses, dramas and films.
June 11th.... the new blog is going well but it is much more work so unsure if I want to keep two going. For now will but am going to bring some of those actress posts over here as I know many have missed out on some faves. Actually just may end up transferring all of them over as I'm seriously leaning to going back to one blog, tried having others at one in the past which also proved to take up a lot more time than I expected.

Like Masami's new drama said I was going to wait until the drama was finished but thought what the heck, may as well keep everyone updated on the these new series and Erika's is no different. Another episode another closed room death to solve, was this a murder? Accident? Suicide? Most parties involved thought it was the last option but thanks to the trio of sleuths the real answer was discovered, though Junko(Erika) and Gou(Sato) are in the middle of things it's really Enomoto(Satoshi) who solves the mysteries. So far it's been a good watch but a bit confusing at times, they really go into depth in solving the crimes, bit like Liar Game did with an overabundance of info, also Erika's character is slightly like Nao, still been a solid watch and it's only been 2 episodes so who knows what direction the series will take. Some screenshots of Erika here from the latest episode, click on the pics to make them bigger plus episode one pics you can check out by clicking on one of the labels.

Was just thinking a few seconds ago that I don't think a post for the SPEC TV movie has been posted, will double check that because it was a good watch, will have mega amounts of pics and such coming up for it then. Meanwhile the cinematic SPEC movie was released on April 7th and has done quite well at the box office, first three weeks it's been in the positions 1,3 and 4. To celebrate the movie drawing over 1.1 million people and is probably much higher now there was an event held last Tuesday to celebrate the fact, here's some pics of Erika and Ryo from it, Erika just looks more amazing than ever!

Aya Ueto on the Himitsu no Arashi show

Aya appeared on the Himitsu(secret) no Arashi show this past Thursday the 26th, despite being an Aya fan the show was only so-so at best. Kind of like the Arashi VS show so much better, it's a lot more lively and fun, this show here is more just talking and eating, so much of it seemed forced. Of course Aya being on it saved it somewhat but she's been on so many better shows as of late, worth a watch if you're a fan but think you'd still be a bit disappointed, some shots of Aya from the show.

Just a quickie breakdown of this series, it being only 5 episodes be too easy to give away too much of it so jusy going to give the basic storyline in hoping you'll want to give it a watch yourself. Masami plays 2 characters in the show, 'twin sisters' yet who were born a year apart, the sisters are.....
The story’s main character Mariko is a woman studying child welfare in Hokkaido. She grew up always doubtful about the love from her mother, who looked nothing like her and who passed away 9 nine years ago. One day, she finds some of her mother’s belongings at a relative’s house, and she heads to Tokyo to seek out the truth behind her birth.

Meanwhile Futuba is a college student living in Tokyo who is focused more on her pop band than her studies. Her band one day appears on television which is seen by Mariko and a few of the other principles in the story for she had been forgotten by all of them, actually it's more of they didn't know about her, she was an 'experiment' that they thought had gone wrong but hadn't, Futuba's TV appearance is what got the story rolling for Mariko never knew she had a 'sister'.

Seems as though Mariko and Futuba were part of an experiment 20 years ago by a group of scientists that included Mariko's father, Kiyoshi Ujiie, the experiments were in-fertilizations, while the group thought the preocess was aborted Mariko's father went ahead secretly with it and thus the 'twin sisters' were born though a year apart.  Kiyoshi had kept it a secret from Mariko about her sister and the fact that both were 'cloned' but the sisters eventually found out about each other and went looking for each other to find out the secrets of their exsistance. However others involved in the experiments also learned of the sisters and that the experiments hadn't been aborted, they too went searching for them to find out how to clone them, one was a prominent senator who wanted a son who he couldn't have.

It takes a while, really the beginning of the fifth episode until the sisters finally meet each other, through their efforts and two of the close friends they finally learn how they came about to being born. While it may sound simple it really isn't that but just tried to give a quickie overview of what to expect from this drama without too many spoilers, as I mentioned it's only 5 episodes so the pace is quite fast and no downtime at all, it really turned out to be one interesting series though a few more episodes would have helped a bit but still worked out fine in the limited time it had.

Nice to see Masami back in a drama, this was her first since Gold back in mid-2010 and she did a superb job in playing the two sisters plus in the final episode she also played their mother, who really wasn't the mother but the female who the scientists had used in the experiments. Solid job too by the rest of the cast, this was a really interesting but too short series, one that's recommended for any Masami fans or just those that enjoy Japanese dramas, also check the next 2 posts for a huge amount of Masami sceenshots from the show.

Holiday weekend so may take a pair of days off as there's many lagers with Nao's name on them though may try to squeeze a pos... 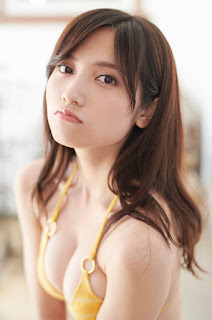